Off With Their Heads – Hospitals (For fans of Dillinger Four, Teenage Bottlerocket, Screeching Weasel) 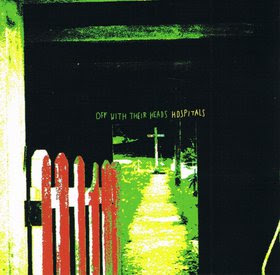 Off With Their Heads, my go to band when I need an anthem about self loathing and generally being a fuck up. I’m a huge fan of the band, but for some reason, I never really gave their 2006 “Hospitals” EP a chance. Shame, because Hospitals contains some of OWTH’s finest material.

Sounding a bit like fellow Minnesotan’s Dillinger Four sort of mixed in with Teenage Bottlerocket, Hospitals contains some of the catchiest melodies I’ve ever heard mixed with some incredibly dark lyrics.

Songs such as “Your Child Is Dead” deals with the issue of school shootings, but not in an immature way like some bands *cough cough* Leftover Crack *cough cough*. Most of their songs deal with drug addiction, dead end job, or some similarly depressing subject, but still manages to be some of the catchiest, almost upbeat sounding punk rock around.

Buy:
Off With Their Heads

Bouncing Souls Home For The Holidays (A Rare and Amazing Setlist!)