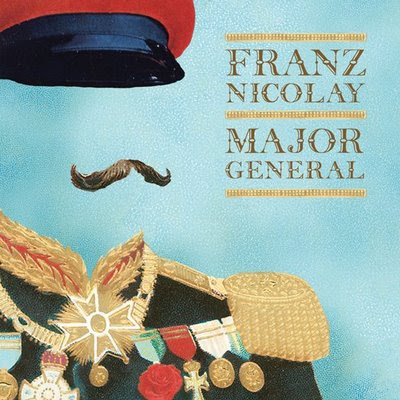 Franz Nicolay is a man of many talents. While this Brooklyn musician is best known for being the prolific accordion/piano player in cabaret punk band (not to mention Housewives loved) World Inferno Friendship Society, and was the primary keyboardist in the much more popular Hold Steady, Franz released a hell of a good solo album as well.

I usually shy away from solo albums, because I usually find the whole “guy with acoustic guitar” thing pretty damn boring regardless of how good their bands are, but on Major General, Franz invites a few other musicians along and plays a variety of instruments himself, giving it a more full band feel.

Franz covers a range of different styles on the album. Opener “Jeff Penalty”, a song about a guy who filled in for Jello Biafra at the Dead Kennedy’s reunion show is a mid-tempo punk song, while “World Inferno Vs. The End Of The Evening” is a much slower number. One talent the man really has is all of the lyrics are incredibly insightful.

A pretty solid album that is damn worth your time if you’re familiar with any of his bands, and if he come s around your area live… seriously, go fucking see him. It’s one hell of a show.