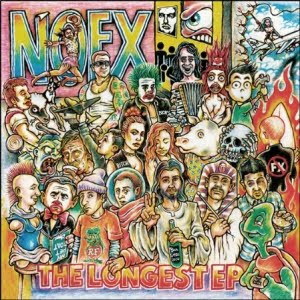 If there is one staple band in punk rock, it probably would have to be NOFX. Actively playing music since 1983, NOFX has released a shit ton of albums and EPs over the years. How’s a NOFX fan supposed to keep up? Finally, the band recently released “The Longest EP” (a play on one of their earlier EPs, The Longest Line), which is a compilation of 30 songs that were found on EPs, compilations, and a few previously unreleased tracks.

Musically, you guys should know what to expect: melodic California skate punk rock. So instead of going over the style of music, I’ll just tell you what exactly is on here.

Yeah, that’s a lot of shit. If you’re a die hard fan and already have most of this, then you can skip it without really missing much, but if you’re not fanatical enough to collect all of NOFX’s stuff, then this is a good album to have to help round the collection.

More:
NOFX – Coaster
NOFX – So Long And Thanks For All The Shoes
NOFX – War On Errorism
NOFX – Pump Up The Valuum

Top 15 Songs about that evil, satanic device known as the radio.

NOFX – So Long and Thanks For All The Shoes (For fans of Screeching Weasel, Dillinger Four, The Queers)