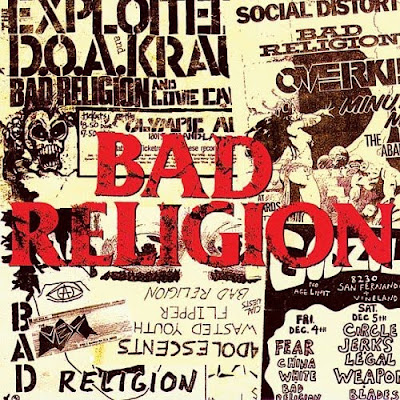 While for many Bad Religion was their gateway into punk rock, I personally never really got into the band. Sure, they were legendary, influential, blah blah blah… but I just never cared enough to really listen to them, up until about a year ago. And for some reason lately, I’ve really been on a Bad Religion kick.

All Ages was a compilation album that Bad Religion released back in 1995, and contains selected songs from their releases Suffer, No Control, Against The Grain, and Generator… with a few unreleased tracks sprinkled in the mix. It’s a solid starting point for anyone who is just getting into Bad Religion, and covers their older discography nicely.

Musically, Bad Religion will always be one of those bands to me who’s songs all sound the same (sort of like Pennywise), and unfortunately with the 22 songs on All Ages, a few of the more mediocre tracks sort of run together. However, there is enough prime cut songs here too: I Want To Conquer The World, Do What You Want, We’re Only Gonna Die, etc.

These guys were one of the most influential bands of that Southern California punk rock sound, so if you dig stuff like that, then you should check out this album.

MP3:
Bad Religion – I Want To Conquer The World