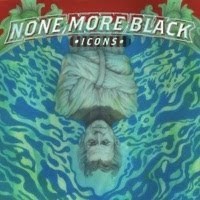 None More Black’s “Icons” is the definition of an anticipated album. After the Jersey/Philly band released “This is Satire” in 2006, the band called it quits early in 2007, and played a free reunion show at a photo gallery in 2008. So here we are now with “Icons”, 4 years after their last release. So what does it sound like?

Good. It sounds fucking good. None More Black was never one for punk conventions (“I don’t give a shit what punk has to say anymore”), and “Icons” mixes plenty of rockabilly in their songs, but strangely enough the album is probably the heaviest album that they have released to date. Songs like “Sinatra After Dark” and “I’m Warning You With Peace And Love” are perfect examples of this.

There are still some of the slower songs that None More Black are known for such as “Here Comes Devereux”, but if you’re a fan looking for songs such as “I See London” and “Majestic”, you’re going to be severely disappointed.

Now for the strange thing about “Icons”: none of the songs stand out to me as much as some of their earliest ones (Wallpaper Looks Like Paint, Drop The Pop), but as a whole, Icons is a better album. All the songs flow smoothly, and they all pretty much rock. Maybe the individual songs will reach my favorite status after a few listens, but this seems to be an album you listen to start to finish.

Highly recommended you pick this bad boy up once it’s released on October 26th.