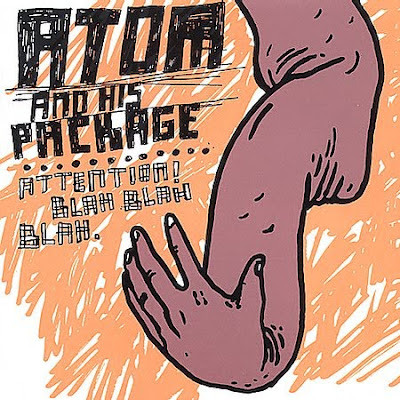 Atom and His Package is an acquired taste, for those of us who like our musical palette to be tickled (that’s what she said). Once described by a reviewer as “retarded Sesame Street music”, there really is no middle ground with Atom, you either love his music or completely despise it. However, if there is one album that could be considered his most accessible for non-Atom fans, it would definitely be “Attention! Blah Blah Blah”.

For those who are familiar with Atom’s earlier stuff, he writes songs over 80s sequencers, but on “Attention Blah Blah Blah”, most of the songs have more traditional instrumentation (don’t worry the synthesizer is still there) making it more listenable for most.

Songs like “Possession” and “The Palestinians Are Not The Same Thing As The Rebel Alliance, Jackass” are some of the heaviest songs Atom has ever written, while tracks like “Friend, Please Stop Smoking” and “Out To Everyone” are some of the more catchy songs we’ve come to love by Atom.

If you’re looking for something a little bit different for your day, check out Atom.

MP3:
Atom and his Package – Possession (Not The One By Danzig)

Songs To Get You Through The Day (A Mix)

Some rare FEAR demos (Must have 80s Punk Rock)