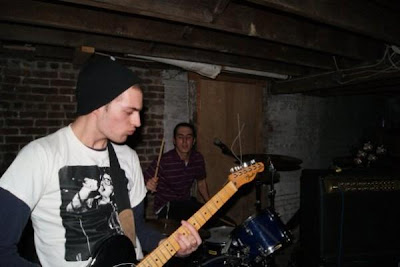 I headed out to JR’s Bar down in South Philly to catch 609’s finest Cobra Lung and a few other bands that I briefly checked out before the show. When I got to the bar, I was insanely early, and was the only person there for the show (the rest were some older locals just having some beers there), but fuck it, I can hang.

First up were hardcore thrash band GA$H (no, not the 80s Australian band). These dudes played high energy hardcore without much banter. Within about 8 minutes, their set was over. That is how you do hardcore.

I was not prepared for Minneapolis female fronted thrash/powerviolence band Cokskar. Having only three members (bassists are overrated), I was completely blown away by their energetic live show. The guitarist and blast beat drummer filled whatever perceived void one might feel without a bassist, while the frontwoman’s crazed vocals and ramming into the crowd kept things moving. Reminded me of a mix between Crucial Unit and Ceremony.
Cobra Lung

New Jersey’s finest NJ thrash band. These guys are young, and pretty fucking talented, and I haven’t seen them since the Terrordome days. The band played really tight as usual, and blasted through their set (including their sort of straight edge anthem XVX, neverending Machine Gun, and Project X cover Straight Edge Revenge). Seriously, they don’t play many shows anymore, but if they play near you, do yourself a favor and come out.

Cleveland scum punk. I want to say good things about this band because their music was actually pretty tight, but they were kind of douches (or at least the lead singer). Dude takes a mic stand and charges the crowd just standing there, hurting one girl pretty bad. Now, that’s not what makes him a dick, as that’s just a lapse in judgement… What makes him a dick is when informed that someone got hurt, he says “good!”. So yeah, fuck these wannabe rockstars.