Millions of Dead Cops playing Philly? There was no way I was going to miss this show. Yesterday, on the beautiful 70 degree afternoon, I headed out to Philly’s Barbary to catch MDC open for UK’s The Subhumans. I only caught the last song of the opening band, but from what I heard, they sounded tight. 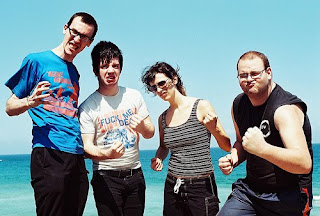 I’ve never heard of these guys before hand, but these Portland dudes ripped it up. It seemed like besides one person, nobody in the crowd knew any of the songs or lyrics, but that didn’t stop a pit opening up for them.

They played straight up catchy punk rock, sort of reminding me of The Descendents a bit. The singer jumped off the stage and played on the floor for a good majority of the set, and I definitely want to check their recorded stuff out. 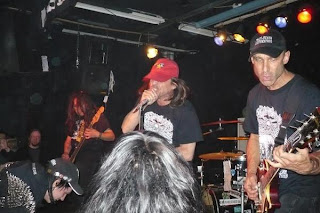 It’s amazing that these guys are still around after all these years, even if Dave is the only original member left. What’s even more amazing is the raw energy they have. Playing hyperspeed punk rock similar to that of the Dead Kennedys, MDC blasted through a shit ton of their songs. We had a respectable pit going, although a few in front seemed to get annoyed anytime someone bumped into them or stage dove (you’re at a punk show… I think it’s to be expected). For the most part though, people were helping each other up when fallen, etc. Few dudes were in the pit with their skateboards… 1980 anyone?

They played a bunch, but some of my favorites and ones I especially lost my shit to were:
-Multi Death Corporation
-Radioactive Chocolate
-My Family Is A Little Weird
-Church & State
-Greedy and Pathetic (FUCK YEAH)
-Corporate Death Burger
-Millions of Dead Cops
-Dead Cops/America’s So Straight
-Chicken Squawk 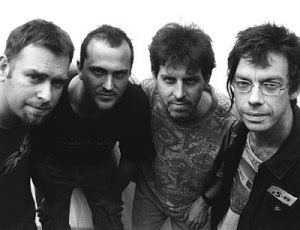 I’ll admit it, for as long as I’ve been listening to punk rock, there are a few major staple bands that I never really got around to checking out for one reason or another. The Subhumans are one of these bands. Still, I was pretty stoked about checking them out, and the crowd was especially excited.

People instantly lost their shit in a pit where it seemed like nobody could stand up. Bodies were flying, and the band didn’t seem to miss a bit. Unfortunately, I’m not familiar with their catologue at all so I couldn’t tell you what they played, but their show made me want to check them out. Highly recommended.