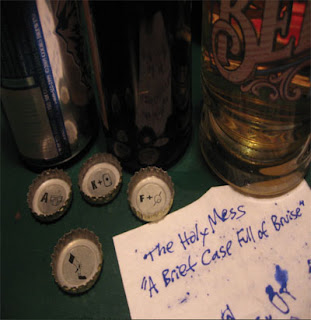 The Holy Mess will be exploding pretty soon, especially now that they signed with Red Scare records, but they still will remain Philadelphia’s premier party band. Bringing kegs on stage with them and passing beer around, their live shows are always a good time, and their recorded stuff completely rules too.

Released back in 2008, “A Briefcase Full Of Bruise” is a 7 song pop punk EP with enough grit to keep jaded folks like myself interested. Playing catchy songs in the veins of Dillinger Four or Off With Their Heads, you’ll dig them if you were into Fat Wreck Chords back in the late 90s. All of the songs on the EP are solid, and a bit more raw and straightforward than their newer “Benefit Sesh” 7 inch.

The Holy Mess are one of those bands who’s songs can deal with some heavy shit, but their music still makes me feel good and puts a smile on my face.