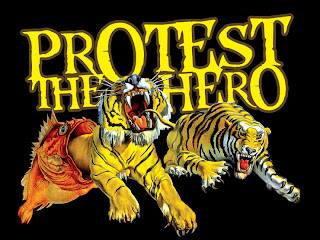 Once in a great while, a show will do something amazing for my health. I can only think of a few instances where I truly needed the show (Give Up The Ghost back in 2003 and Smoke or Fire back in October), and last night was one of them. Incredibly stressed and on the verge of a panic attack (only had 2 in my life), a little Protest The Hero was exactly what I needed… Fuck Yeah.

I made it to the Trocadero just as the second last band was finishing up (not my thing, they were like a Southern Rock metalcore band) and got there in time for Protest.

Protest The Hero is one of those bands that I’ve been following since their inception, and have watched evolved over the years. From a Propagandhi/Strike Anywhere influenced melodic punk band to the ridiculous progressive metal riffs they’re famous for now, I fucking love everything these guys have put out.

Playing Propagandhi over the PA while the band’s equipment was getting set up (which I sang along to every word), the band finally took the stage and blasted straight into C’est La Vie. Some people were dancing (myself included) throughout their set, although people never really seem sure how to keep up with Protest’s ridiculous time changes, etc.

Rody seemed to be in high spirits, and overall the band played pretty tight. They played a solid mix off of their big three albums, with plenty off of Fortress and Scurrilious, and a few off Kezia. At one point they said they were going to play one so old, they don’t remember the name (getting me all amped that it was going to be “Red Stars Over The Battle Of Cowshed”), but it turned out to be one off Kezia (C’mon, it’s not THAT old).

A damn good time, I would love to see these guys in a smaller venue such as The First Unitarian Church or The Barbary. Unfortunately not treated to a cover of Fuck The Border this time.

Setlist (Not In Order, Pretty Complete)