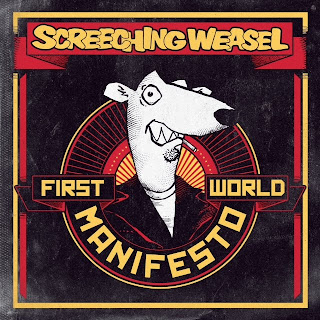 Yada yada yada, mandatory introduction about Ben Weasel being a huge asshole and punching a girl who was throwing bottles at him, clocked someone else, etc. We get it, the dude is a complete douche. However, before all of that drama, Screeching Weasel dropped one last album before all of the other members resigned due to Ben’s antics.

Released in March, Screeching Weasel’s “First World Manifesto” is the 12 album by the band, and the first album in over 11 years from them. With even more line-up changes, of course it has a bit of a different sound than their earlier stuff. First World Manifesto is incredibly catchy, and a good listen. It’s a lot poppier and sugary than their earlier stuff (aka don’t expect BoogadaBoogadaBoogada), but the veterans are able to pull it off.

With simple melodies and unfortunately often juvenile lyrics (I’m embarrassed that I like the song “Little Big Man”, which is essentially an attack on an unnamed certain someone in the punk community), don’t expect anything more than a fun album that is perfect for the summer. They’ve never made hating everyone so damn catchy.

More:
Screeching Weasel – Television City Dream Redux
The Haverchucks – Demo (you need to check this out)
Hold Tight! – Can’t Take This Away

Guttermouth – Musical Monkey (For fans of The Vandals, Screeching Weasel, The Queers)