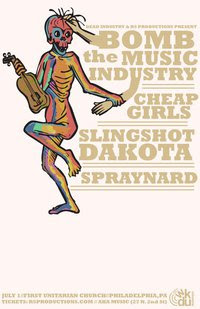 On Friday night I ditched my friend’s BBQ early so I can catch beloved Long Island’s Bomb The Music Industry at Philly’s First Unitarian Church. Unfortunately I missed every other band, and only heard part of Cheap Girls (I got their in the middle of the set, and at the risk of “Too Much Information” had to poop during the last half).

Holy shit was it fucking hot in the basement of the church. I was sweating immediately and the band didn’t even take the stage yet (Bouncing Souls in a few weeks there is going to be NUTS). The full band somehow seemed crowded on stage (even though there were four of them), and after a little 80s music intro, they blasted into “I Don’t Love Anymore”.

We lost our shit, with a pit breaking out, people stage diving (cough yours truly cough), and the sing-a-long having everyone in the crowd shouting along. The band played like how BTMI plays, slightly sloppy, but always coming together for the important parts… with the crowd screaming along to every song except their 2 new ones.

Some antics were had during the set, specifically when one guy got on stage and his friend passed him a drink, which he slammed, and then stage dove (with Jeff giving a confused laughing look asking “What the fuck was that?” to which their guitarist replied “the most punk rock thing I think I’ve ever seen”). Another was during the encore when this couple went on stage and decided to sing out the rest of the song for the band, and invited everyone on stage to join them (the drummer even gave her a stick so she can play the drums).

The new songs the band played were pretty tight, and although the crowd didn’t really know them, we still danced. The band (0r fans) seemed to damage a lot of the equipment because by the end amps weren’t working, etc… it felt very much like the Arrogant Sons Of Bitches shows I used to attend 9 years ago (aaaaand I’m old….)

Setlist (Probably not in complete order):
I Don’t Love You Anymore
Hurricane Waves
Congratulations John, On Joining Every Time I Die
Everybody That You Love (I think?)
Saddr, Weirdr
All Ages Show
Big Ending
The First Time I Met Sanawon
Vocal Coach (I think?)
493 Ruth
Shower Beers
It Shits!!!
Even Winning Feels Bad
Stand Their Until Your Sober
25!
Syke! Life Is Awesome

The Movielife, The Flatliners, MakeWar Live In Philly (5/4/17)