Last evening before heading out to some ridiculous dance parties, I headed over to Philly’s Barbary to catch San Francisco’s Punch. I missed the first opener but caught San Francisco’s Loma Prieta. 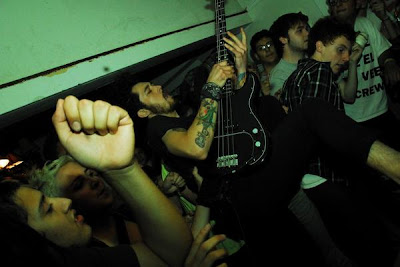 I’ve never heard of these guys before and I also have no idea what their name means, but they were fucking brutal. Lots of feedback and noise, these guys reminded me a bit of Converge’s older shit. They had a few people in the crowd dancing around, but it seemed like the majority of people had no idea who they were. Regardless, they fucking tore it up. I checked out their recorded stuff on their webpage, and recorded it’s much more ambient. The live stuff was much heavier… definitely check them out if they come near you. 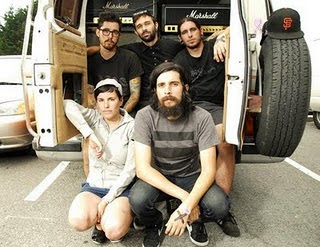 Punch is one of the heaviest female-fronted hardcore… no fuck that… plain hardcore bands around. Once they took the stage the place instantly exploded into a frenzy of stage dives, pile ons, and pits (and one guy two stepping in the back by himself with a broken arm… cough no idea who cough).

These guys played a tight set with their incredibly positive yet pissed off 45 second bursts of pure fury. Playing some off their Self Titled, they unveiled some new tracks from a 7 inch that was released 3 days ago (and it sounded solid). If you like frantic hardcore like Coke Bust and Violence Violence era of Ceremony, you definitely need to check out Punch.

Cokebust – Lines In The Sand