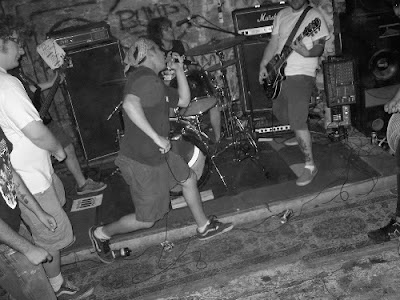 Yesterday afternoon I headed out to my second home Philly’s Barbary to catch DC hardcore dudes Coke Bust. The place had a decent amount of people going, and all the opener’s I saw were solid. As par the course for Sunday shows I’ve been to, the crowd was pretty tame (which was a bit surprising since it was fucking Coke Bust… but I was totally there too, feeling really low key).
Congenital Death:

Philly locals Congenital Death were the first to take the stage, and I have to say, I was really digging them. Female fronted hardcore powerviolence, their music reminded me a bit of Crucial Unit if they liked to throw in hardcore breakdowns every now and then. They also played a cover of Youth Of Today’s “Prejudice”. Sweet.

Local Philly homies playing furious hardcore, these bud’s are actually the guys from Cobra Lung, just switching instruments. They anonounced that this was their last show, and singer Jim was a wild man with the microphone diving into the crowd, starting pits by himself… These guys shouldn’t be breaking up.

I missed United Youth because I stepped outside for a while (fucking beautiful out), but made it back in time for Backslider. I’ve seen these guys on flyers plenty of times, but somehow always missed them. I didn’t realize it was just two dudes (one guitarist and one drummer), but they were heavy as fuck and plenty in the crowd seemed to know every word.

I know. I know… I missed Sick Fix, we don’t need to talk about it. But I was able to catch DC’s Coke Bust, and they put on a solid (yet way too fucking short) set. They had an awesome stage presence, and they just seem to love what they do. They played their spastic hardcore to a relatively calm (but still digging it) crowd, and before we knew it… they were saying goodbye.

Highlights:
Under The Street Lights
Bullshit Copout
Lines in The Sand
Cycle Of Violence

MP3:
Coke Bust – No One To Impress

Big D and the Kids Table at the Starland Ballroom