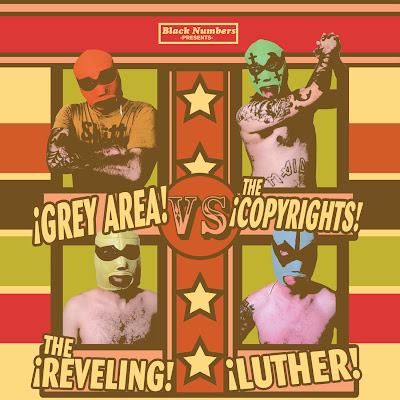 The split kicks off with “Lucky” and “Bad Anything” the first two by Grey Area. It’s always great to hear anything new by these guys, and both songs are solid, more mid-tempo jams (they could even pass as Higher Giant songs).

The Reveling’s two contributions are incredibly catchy, and pick up right where the band left off with Tributaries (and the guitar melody in It’s “Time To Ride” is nothing short of addicting). Fans of the band or fans of the Menzingers need to check this out.

Next up are pop-punk kings, The Copyrights. Contributing one original (“The New Frontier”) and one Scared Of Chaka cover (“Straight To The Office”), both songs are like The Copyright’s older stuff: fast, Ramones influenced, and catchy as all fuck.

Finally Luther closes out the split. To be completely honest, I wasn’t a huge fan of their full-length, it wasn’t bad by any means, just a lot slower than I personally like. With that being said, I wasn’t sure what to expect with their two contributions. I must say I was pleasantly surprised by both “Sixty-One” and “The Door Is A Penthouse”. Both songs are the slowest jams on the album, but I am really digging them. Luther mixes melodic punk rock with what almost sounds like 90s alternative rock at points, and it works well.

Definitely pick this split up, it’s rare for a split to be this damn consistent. And maybe I’ll see some of you at the Philly release show for this?